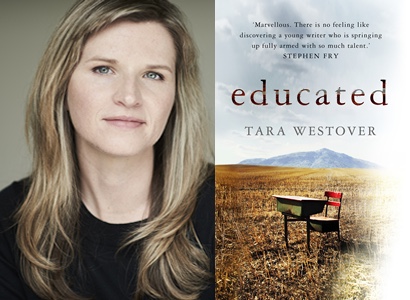 In Educated, Tara Westover recounts her childhood about growing up as the youngest of seven children in a Mormon survivalist family. Not only was their life lived along the strictures of a belief that espoused very conservative religious views, but their father also raised them to believe in, and constantly prepare for,  the ‘End of Days’.

Her father’s suspicion of the Government extended to refusing to allow his children to get a formal education – something he had done with his first three children, but as his religious beliefs intensified, and his paranoia regarding the ‘brainwashing’ that a public education would do to them, he pulled them out of school to be homeschooled. This ‘homeschooling’ was haphazard and disorganized, and although the intention was good, it ended being something that came second to working on their father’s junkyard – scrapping for metal.

It was not until she was 17 years old that the author stepped into a classroom for the first time, as a freshman in college.

I loved the first half of the.book immensely. It was laugh-out-loud funny, incredulous, and very reminiscent of The Glass Castle by Jeanette Walls. It is about growing up in rural America with parents that had alternative views to mainstream education and lived in isolation and ‘off-the-grid’ on society’s margins. Despite the lack of formal education, having no access to medical health care and being reminded daily of the ‘end of days’ that required the family to always have their ‘head-for-the-hills’ bags packed, the author describes a childhood that was happy, if different from everyone else’s.

In later years though, her desire for a formal education, inspired by her elder brother, Tyler’s leaving home to go to college, together with a realization that without an education her life would forever be the same version of what she was already doing – either working on her father’s junkyard or packing groceries in the local store, she begins studying towards her college entry exams.

The second half  gets much darker as she grapples with fitting into the formal education system; recognizing how lacking her knowledge of world issues is (she recounts a story of learning about the Holocaust for the very first time in one of her freshman lectures) and attempting to find some balance between leaving home to get educated, or as her father crudely put it: “whoring after man’s knowledge”, and ‘abandoning’ her family.  She also begins to deal with the reality of her abusive older brother, Shawn, and the fact that the entire family had ignored the years-long abuse that began when she was fifteen. It is not only her getting an education that fractures the family, but also her daring to speak of the abuse to her family. Her family picks sides, with the siblings torn between supporting their sister yet also recognising their dependence on a father who himself is tyrannical and emotionally abusive; a mother who has lost her voice to her domineering spouse; and a brother who has consistently abused and threatened all of them over the years.

Interestingly, the estrangement from her family and the ultimate alliances are forged along the ‘educated’: the author, her brother Tyler- who earns himself a doctorate in Engineering, and her other brother Richard- who also goes on to get a college education and doctorate in Chemistry.

Westover’s journey from rural America, with all the odds stacked against her, takes her to Brigham Young University, then to Cambridge for an MPhil and PhD. It’s an incredible memoir of childhood and of family ties that bind so strongly they almost destroy her. It is mostly a story about the resilience if a young woman in overcoming years of fanatical beliefs ingrained in her from a young age and her desperation in trying to forge new beliefs and to heal from the residual effects of the physical abuse and verbal abuse suffered. This is a highly recommended read.