Unapologetic powerful stories in Heads of the Colored People 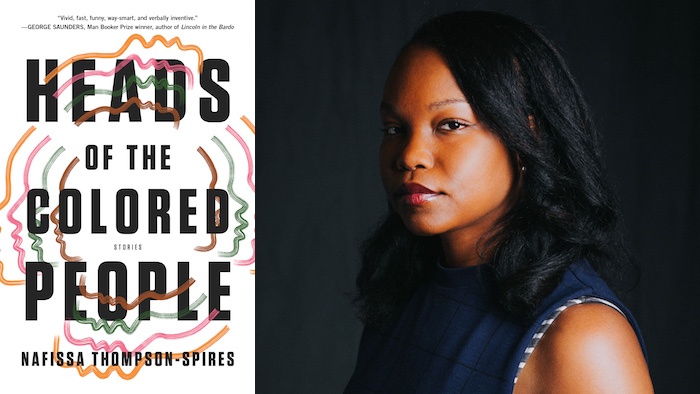 Title: Heads of the Colored People

And what is a black network narrative but the story of one degree of separation, sketching the same pain over and over…?

The blurb reads that the collection ‘interrogates our supposedly post-racial era’. The tongue-in-cheek suggestion prepares the reader for a collection that is both thought-provoking and humorous. Nafissa Thompson-Spires‘s collection of short stories in Heads of the Colored people is a beautiful mix of intertwined stories that introduce a myriad of characters, touching on a variety of themes such as code-switching, micro-aggressions, colourism, depression (and suicide), police shootings and repressed anger.

The first story, Heads of the Colored People: Four Fancy Sketches, Two Chalk Outlines, and No Apology references a lot of pop culture: slang, trap music and animé and African-American history. I had to pause often to look them up just to be on the same page.  It introduces a number of characters, whose individual stories are connected, and is an apt opener to the rest of the collection. The prose is simple, with slight elements of a stream of consciousness narration in the third person. It is lyrical and makes for really rhythmic reading. The reader is introduced to Riley, with his blue contact lenses and bleached hair, but who is not a self-hating young black man. He is highly attuned to the scorn he elicits for his love of cosplay, for instance, and those who would be critical of his not being down because of his cool enthusiasm to the music of “his people”. The author’s conversational writing style in this story and subsequent ones made this one of my favourites in the collection.

In quick succession, the reader is introduced to Brother Man, burly but not violent. Thompson-Spires makes these small but significant suggestions to the reader that hint at the messaging in her stories without being explicit. In the few pages that introduce Riley and Brother Man, their respective ‘degrees of blackness’ are very obvious. The other characters in the story, Kevan the artist, and Paris Larkin, Riley’s girlfriend and fellow lover of cosplay, manga and anime. The ending of the story builds up quickly and ends in a melodramatic way, yes in the author’s own words. She does an incredible job of the ‘black network narrative’. The story is powerful. After I read it, I gave it to my thirteen-year-old son to read. He not only liked it but also made me listen to a track on an album he was listening to called ‘Prom/King’ by Saba, from his album Care for Me. He schooled me further on the comparisons to be made between the story and the song: similar themes, different medium.

In The Necessary Changes Have Been Made the characters deal with the micro-aggressions of everyday office politics, made worse by the racial slights – or perceived slights – felt by the characters.

In Fatima, the Biloquist: A Transformation Story the reader meets a grown Fatima, introduced in an earlier story. Her transformation is about her finally understanding the importance of code-switching and recognising her ‘pink lip’ and ‘brown lip’ and using them under appropriate circumstances.

Suicide, Watch follows a young girl’s cry for help over social media. Her maladjustment and discontent play out on social media, even as she herself admits to not having a lot to feel discontented about. Even her thoughts of suicide are not fully articulated. Her, again the author ends the story in that manner that leaves the reader thinking: Really!? Just like that? Not necessarily wanting a different ending but surprised as to how clever she crafts the story.

Nafissa Thompson-Spires does not bring a single narrative to her story-telling. She gives us a wide range of black characters and writes them in the same way we encounter them daily, not in a generic form, but in perfect shapes, different colours, with flaws and with disabilities. This is a  clever, humorous collection.