It’s not about the burqua – edited by Mariam Khan 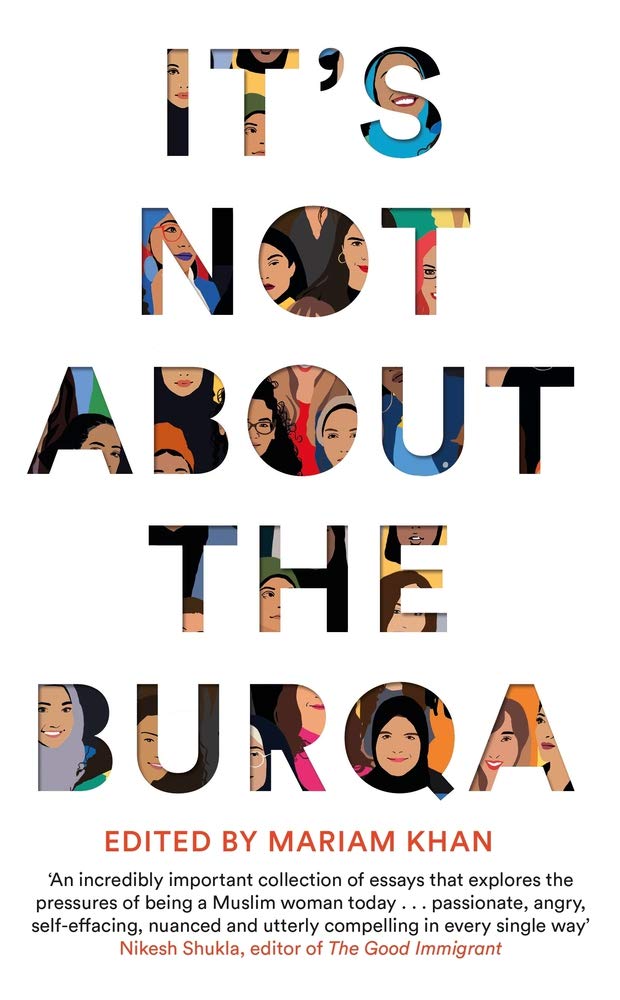 Title: It’s not about the burqa

This collection of essays written my Muslim women on their faith; their representation in mainstream media, or lack thereof; their feminism  in the face of pre-conceived views about the oppression of veiled Muslim women; their sexuality and their race.

“Here are essays about the hijab and wavering faith, about love and divorce, about queer identity, about sex, about the twin threats of a disapproving community and a racist country, and about how Islam and feminism go hand in hand.”

The collection opens with Mona Eltahawy’s Too Loud, Swears Too Much and Goes Too Far. She is critical of the demands made on women by the patriarchy to be ‘less than’ not ‘too much’ calling out the racists, the Islamophobes and those in the community – read men – who  all create this intersection of multiple oppressions.

On the Representation of Muslims (Terms& Conditions Apply), Nafisa Bakkar – who started the website Amaliah – “a platform dedicated to amplifying the voices of Muslim women” emphasises the importance of allowing Muslim women to exist on their own terms without having to explain the stereotypes around their beliefs, their culture or their feminism, and more importantly away from the gaze of mainstream representation and influence of representation politics.

The discussion of the separation of privileged and under-privileged Muslim woman in mainstream media is picked apart by Afia Ahmed in The Clothes of My Faith, who explores why the hijab has gone from being a symbol of Muslim faith to becoming commoditized and thereby creating a further chasm between those that are represented in mainstream media – and thus validated as acceptable, and those that are regular Muslim women struggling with the daily negative perceptions of what their hijab represents to the secular eye.

Jamilla Hekmoun’s There’s No Such Thing as a Depressed Muslim is poignant in its accuracy of perceptions on mental health in general but for non-secular communities in particular.

In A Gender Denied: Islam, Sex and the Struggle to Get Some, Salma El-Wardany’s essay points to how perceptions of sexuality are distorted by Islam’s theological rulings and steeped in patriarchy, thus muffling the voices of Muslim women who wish to talk about sex and Islam in open non-judgemental conversations.

In Mariam Khan’s Feminism Needs to Die and Sufiya Ahmed’s First Feminist, the contributors both open up on misconceptions about Muslim feminism when judged against the default White Feminism position. Mariam Khan points to the fact that finding that balance between her feminist views and her faith was not that difficult because Islam is in essence encouraging of feminism; the challenge was that Feminism for White and mainstream feminists continued to equate her hijab to oppression.

Aina Khan OBE, an international family lawyer explains the challenges of living with Islamic laws in a secular society, especially where it affects the rights of Muslim women in How Not to Get Married (or why an unregistered nikah is no protection for a woman).

Essays on mental health in the Muslim community; feminism and sexuality are all part of this impressive collection. The contributor biographies are as equally varied as the topics discussed, and this makes for different perspectives on a religion fighting to not be seen as monolithic and with only one standard against which all Muslims should be seen.