She Would Be King by Wayétu Moore 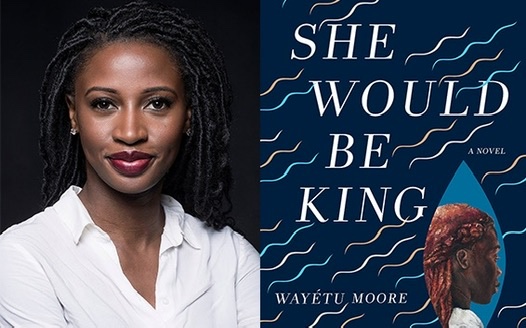 Title: She Would Be King

In She Would Be King, Wayétu Moore reimagines the beginnings of Liberia, the West-African country founded by freed African-Americans and slaves from other countries. Fusing magic realism and historical fiction to tell the history of a country founded at the end of the tragic trans-Atlantic slave trade, she treats the reader to story-telling laden with folklore, magic and heroism.

We meet Gbessa, a gifted young woman who is seen as cursed by her village of Lai – with the day of her birth coinciding with the resurrection of a legendary cat that exacts its revenge on the woman who killed it. This part of the story is based on an old Vai legend. To the indigenous Vai people of Moore’s re-telling, this tragic beginning of life cemented the cursed life of Gbessa, banishing her and her mother to the margins of society. Gbessa is further banished from the village, on suspicion of being a witch, driven to the forest to die. She survives the banishment and learns of her immortality when she survives a viper bite.

The story fleets back and forth between Lai, Gbessa’s village and the plantations of Virginia, when we meet June Dey whose own entry into the world is equally fantastical. He has superhuman strength and has skin that is impermeable to whips and bullets – the weapons used by the slaveowners to break and subdue the slaves. He flees the plantation and boards a ship he thinks is headed to New York, where slaves fleeing the South were headed. His arrival in Monrovia, together with other free slaves to the newly founded colony coincides with that of Norman Aragon.

Norman Aragon, the child of a British father and Maroon mother from Jamaica, also arrives in Monrovia fleeing a past that includes a dead mother who had the gift of invisibility; a colonial father that saw his own son as an anthropological study – measuring, pinching, probing every inch and year of growth and recording every change for his return to England,  and life on the mountains of Jamaica among the Maroon people that he ultimately leaves. He arrives in Monrovia as a stowaway, under the stealth cover of his invisibility.

The book revolves around the three main characters, with the story anchored solidly by Gbessa. It moves effortlessly from the caves, villages and shores of the country – where Norman and June Dey fight French slave traders, who attack villages and round up people, despite the slave-trade having officially ended – to the new colony and homes of the settlers, who campaign for independence from the American Colonization Society (ACS) and demand self-rule in their new home. Norman and June Dey become heroes and legends to the villagers they free, as word spreads throughout the country of the pair’s encounters with traders. It is here that the author details the formation of Liberia, touching on the conflict between the new Americo-Liberian settlers and the indigenous people; of the roles of the new settlers and indigenous people in the running of the country; of the transplanting of a system of slave and master from America to Africa now driven by the freed slaves, and also of the conflict felt by some of the new settlers to establish a country free of the old hierarchy and elitism of America and one that is more equal than most have ever known.

While Norman and June Dey fight the traders, freeing the captured people and saving villages; Gbessa marries into Monrovian society, becoming a society woman and wife of Gerald Tubman, leader of the new colony’s army. Moore gives weight to Gbessa’s role as the voice of the indigenous people – as she tries to convince the new settlers that, for the newly-formed country, working together with the indigenous people would benefit the country more.

Moore weaves the magic realism into the story, using the wind as the constant thread, where she whispers and drives, encouraging and steering the plot along between the three – leading to the ultimate conclusion of their new destiny from Virginia, Jamaica and Lai to Monrovia and the new Liberia.

There were times when the plot unfolded a tad too slowly and parts where it would have been more interesting if the author had delved deeper into the history to give it more a historical slant and less magic realism – but that is just personal preference.